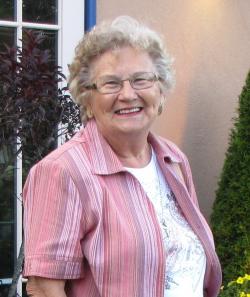 Cap Lumiere, NB – Andrea Hebert 91 years, passed away peacefully at the Rocmaura Nursing Home in Saint John, NB on Monday, August 12, 2019.  Born in Cap Lumiere, she was the daughter of the late Donat Richard and late Elmire (Cassie) Richard. She was a previous member of the C.W.L. in Rexton.

Besides her parents, she was predeceased by her husband, Theodore Hebert; one son, Ted Jr and two brothers, Alphonse and Gaston.

Visitation will be held at Thompson’s Funeral Home in Richibucto on Wednesday from 7-9 pm only.  A Funeral Mass will be celebrated on Thursday, August 15, 2019 at 11:00 am at the Immaculate Conception Roman Catholic Church in Rexton.  Donation’s in Andrea’s memory may be made to the NB Alzheimer’s Society and would be appreciated by the family.  The family would like to thank all staff of Rocmaura Nursing Home for their exceptional care given to Mom.  Arrangements are in care of Thompson’s Funeral Home, Richibucto (506-523-4252).