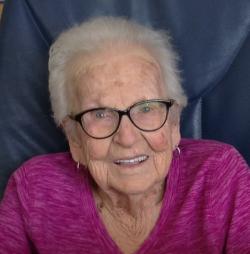 ST. IGNACE, NB – Viola Richard, 99, of St. Ignace, passed away peacefully at the Stella Maris de Kent Hospital on January 3rd, 2020. Born in St. Charles, she was a daughter of the late Fred and late Agnes Arseneault. She was a member of the Golden Age Club in St. Ignace.

Besides her parents, she was predeceased by her husband, Urbain Richard; one daughter, Jeannette Maillet; one sister, Bella Cormier; three brothers: Sylvestre Arseneault, Bernard Arseneault and Antoine Arseneault.

Visitation will be held at the St. Louis Memorial Home in St. Louis de Kent on Tuesday, January 7th from 1:00 pm until time of the funeral at 4 pm at the St. Ignace de Loyola Roman Catholic Church.  Donations in Viola’s memory may be made to the Alzheimer’s Society or the Heart and Stroke Foundation would be appreciated by the family.  Arrangements are in care of Thompson’s Funeral Home, Richibucto (523-4252).