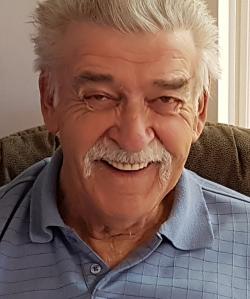 ST. CHARLES, NB – Edmond Vautour 77, of St. Charles passed away peacefully at the Stella-Maris-de-Kent Hospital, Ste. Anne on Saturday, August 15th, 2020. Born in Acadieville, he was the son of the late Urbain and Marthe (Robichaud) Vautour. Before retiring, Edmond worked as a woodsman. Edmond loved and gave such good care to his wife, Annette, for which Annette and her children will forever be thankful. Edmond was a fanatic of old cars, and he loved spending his time going for long drives and eating out at restaurants with Annette.

Edmond also leaves to mourn his two brothers, Ovila Vautour of St. Louis and Marcel Vautour of Grand-Mère, QC; one brother-in-law, Alphonse Richard (late Mina) of Acadieville; as well as many nieces and nephews.

As per Edmond’s wishes, there will be no visitation or funeral service at the church. A graveside service will be held on Saturday, September 19, 2020 at 11:00 am at the St. Charles Borromée Roman Catholic Cemetery in Saint-Charles.  The family wish to express a special thank you to Dr. Lanteigne, Dr. Josette Vautour, the staff at the Stella Maris Hospital and at La Villa Maria for all their kind and compassionate care of Edmond.

Arrangements are in the professional care of Thompson’s Funeral Home, Richibucto (523-4252)