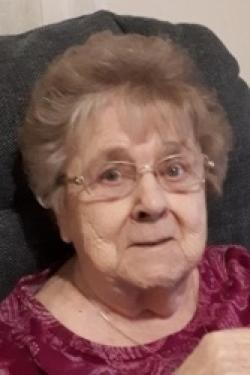 RICHIBOUCTOU-VILLAGE, NB – Annette Robichaud, 83, of Foyer Bois-Joli, St-Louis-de-Kent, formerly of Richibouctou-Village, NB passed away peacefully at the Stella Maris de Kent Hospital, Ste-Anne on Monday, August 24th, 2020. Born in Cap-Lumiere, she was the daughter of the late Florient and Celina (Caissie) Richard.

Annette will also be missed by her sister, Christine Jaillet (late Clement) of Moncton; as well as by many nieces and nephews.

Visitation will be held on Tuesday, October 27th at Thompson Funeral Home, Richibucto from 1:30pm until departure for the funeral at 3:30pm. A Funeral Mass will be celebrated on Tuesday, October 27th, 2020 at 4:00pm, St. Antoine de Padoue Roman Catholic Church, Richibouctou-Village. If so desired, donations in Annette’s memory may be made to the Alzheimer’s Society.

Arrangements are in the professional care of Thompson’s Funeral Home, Richibucto (523-4252)