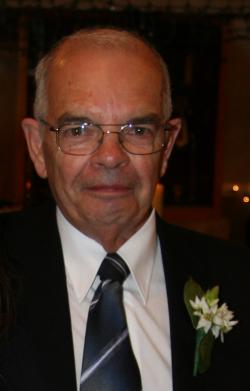 REXTON, NB - James (Jim) Walker Cail of Rexton, formerly of Cails Mills, passed away peacefully at home on Saturday, October 10, 2020 with his loving family. He was married to Doreen (Glencross) of Beersville for 64 years. Born in Chatham on July 22, 1936, he was the son of the late Keith and Alice (Martin) Cail of Cails Mills.

When Jim finished school he bought a gravel truck and operated it for about 15 years.  In 1963 he went to work for the DOT, spent many winters plowing snow, summers as an inspector on new bridges and highways, later in his career he supervised the hydro-seeding crew in the summer months, retiring in 1994 with 30 years of service.

He joined St. James Presbyterian Church in Beersville at a young age and started to service as an elder in 1967, and became Clerk of Session in 1971, a position he held until his passing.

Together with brothers Tom and Merle, Jim joined the Lodge in 1969. He was Past Master of St Andrew Lodge #16, Rexton NB and Past District Deputy Grand Master District # 2, of the Free and Accepted Masons of NB. Jim was also a member of the Luxor Shrine of NB, and member of the Moncton Shrine Club.

When the St. John Ambulance was first posted in Beersville thirty years ago, Jim and Doreen were among some the first St. John Ambulance attendants. Jim was also a member of the Beersville Fire Department, retiring with the rank of Captain in 2009 with 27 year’s service. Until the old tanker was retired this year it was still referred to as "Jim's truck".

Above all else Jim loved Doreen and his family. Whatever he did, he did with their well-being and happiness in mind. He cared deeply about people, and enjoyed company. He loved his garage. Every item in it had its own location and he even knew if one was moved. For many years he offered a "body building" course for the boys by spending every Saturday and many evenings on his woodlot, cutting the winters firewood. Jim liked a job well done. He took several welding and mechanical courses at NBCC to repair things for his neighbours near and far.

Due to COVID-19 restrictions there will be no visitation at the funeral home.  A private celebration of Jim’s life will be held for his immediate family at St. James Presbyterian Church in Beersville.  Donations in Jim’s memory may be made to St. James Presbyterian Church.  The family wish to express a sincere thank you to Dr. Eric Martin, the staff at Extra Mural, the Doctors and Nurses of the Dumont Oncology Center, for all their kind and compassionate care of Jim.