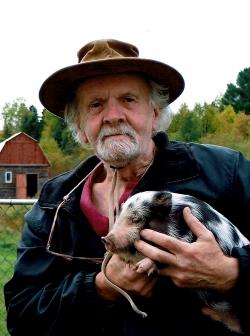 SAINT-ANNE-DE-KENT, NB – Terry Hallett 86, of Saint-Anne-de-Kent passed away suddenly on the evening of May 10th, 2021 at the Rexton Lions Nursing Home. Terry was born in Toronto to Leonard and Margaret (nee Proctor) Hallett on August 13th, 1934.

Terry was raised on a farm as a ward of the Ontario Children's Aid Society from the age of 3. At age 14 he ran away from the farm to Toronto and worked at various jobs, including working in a sweatshop

making socks, in a lumberyard, peddling Wesson bread, and finally peddling milk to customers' homes for Silverwoods Dairy, driving a cart pulled by horses. He boarded with a Jewish family and said that they were the first people he ever lived with who treated him like a human.

In 1952, at age 17 he joined the RCAF, starting as an airframe technician, then went aircrew and moved up in rank to Flight Lieutenant. He had several good friends from the Maritimes, but his best friend was Bert LeBlanc, from Shediac. He often told Ginger how friendly and welcoming Maritimers were and that he had many air force buddies who hailed from New Brunswick and Nova Scotia. From 1953 to 1956 Terry was stationed overseas in Baden-Baden, Germany, and he traveled to several countries during his 15 years in the RCAF. He recounted stories about his times in Scotland, Ireland, and Morocco.

Terry married his first wife, Irene Eccles, whom he met while on leave in Toronto, and while stationed in Chicoutimi, Quebec, in the late 1950's they started a family. He didn't have a car in Europe, just motorcycles; in Quebec he bought his first new car, a Hillman Minx, which he brought to Ontario with him. After a transfer to Trenton, ON, in 1961, where his third child was born, he also began farming, with hired help.  Following his retirement from the RCAF in 1968 he founded and ran a refrigeration and air conditioning company in Orillia, ON, doing a lot of work for the Cadillac-Fairview building in Toronto. When he sold his business to his two friends/employees he farmed again in Trout Creek for several years until ill health caused him to move to North Bay, ON. While in Trout Creek he raised "fancy cats" for show and had two Komondors that he dearly loved.

In January 2005, he met, via an online discussion group, and then married Ginger Kinworthy Louder of Indiana; they soon moved from his bachelor apartment in North Bay to a hobby farm in Mattawa, ON. Both avid nature and animal lovers, each with two cats and a dog, and Toad with turtles and birds as well, they rescued animals at auctions, mainly chickens and degus, but also a "mini" pot-bellied pig they named Dudley, shown above. Dudley, who was quite intelligent and social, turned out to not be so mini, growing to around 250 pounds, but he was a joy throughout the ten years of his life, as were the yard-roaming chickens with their curious personalities. In 2009 Terry and Ginger moved to the Maritimes, bringing their menagerie of animal friends with them, to settle in Sainte-Anne-de-Kent, where they lived happily, strolling along the beach, exploring the woods, driving along the shore to look for shorebirds (he called each great blue heron "pat on the head"), and enjoying their family of "creatures" until it became necessary for Terry to be cared for in a nursing home in May 2019. By that time Dudley and the chickens had all passed away, leaving only three cats and one dog. It was a time of decline.

Terry raised, rescued and cared for many, many creatures throughout his life. He once rescued a groundhog from being stomped to death by a cruel neighbor, tended to its injuries, named it BB (for Baby Bear), and for several years BB would return to Terry every fall to live with him until the next spring. His favourite animal is the toad, which is the name he loved to be called. He loved the stories of Frog and Toad in "The Wind In the Willows" series. It distressed him to see or hear of frogs and toads being eaten or otherwise harmed, so he was not a fan of birds of prey or snakes although he would never harm them. He loved mice and always rescued them from cats when he could. He caught flies in his hand and released them outdoors, and did the same for spiders. Because of his farming background, both as a child farm laborer and later as an adult, Terry knew a lot about farm animals and crops. He could identify all the breeds of cows, chickens, geese, ducks, goats, and pigs. It was lovely to drive along with him and have him point out Charolais or Ayrshire or other breeds of cattle, or what crop was growing in a field. He loved to see baled hay, despite having had to work at handling bales of hay as a child.

Terry especially loved chickens. As a child he used to sit in the farm’s chicken coops, considering the chickens his friends. When he and Ginger rescued chickens at auctions he wanted to get as many different breeds as possible, and always tried to get both rooster and hen of each breed. He delighted in the chicks that hatched and in the fact that the little bantams were such good mother hens.

Terry always had to have a dog companion. Dogs loved him, sensing his love for them. Johann, the rescue dog Ginger brought with her to Canada, bonded with Terry immediately. In every photo of them together Johann is adoring or kissing him. His final dog is a rescue from the shelter in Restigouche, NB, named Renard LeFoxy, a.k.a. Foxy, a.k.a. Dogger. Terry had an affinity for cats as well. One of his favorites was Puddlejump, who was quite a character and who moved to New Brunswick with the rest of the family. Toad was a very gentle man, and animals sensed this. His email signature quote was: "The greatness of a nation and its moral progress can be judged by the way its animals are treated."- Mahatma Gandhi

Terry’s favorite flower was the Heavenly Blue Morning Glory; every year he planted a row of them on the verandah, with strings for them to climb. He loved other flowers as well, and liked to plant vegetable gardens, in raised beds due to back pain from an old injury. It hurt him to stand, so he would never wait in line for any reason; he would always have to keep moving or else sit down. He often commented that shovels were meant for leaning on.

Among his many interests, Terry studied philosophy, ardently promoted social justice and sustainable living, wrote a newspaper column and worked for the NDP while in Ontario, studied history, especially WWII. He admired Winston Churchill. When it became harder for him to read he loved to be read to, always nonfiction unless about animals (especially toads). Terry very much enjoyed listening to public radio news programs; he kept the CBC or NPR on nearly 24/7. He loved music, both on YouTube and especially live. When asked if he played an instrument he would respond, "Yes. The radio." Always the joker. He did own a set of bongos that he claimed to have played at one time. Although claiming to be shy, he loved talking to people and was the life of the party. He told jokes, sang and danced to music, entertaining folks around him. An eclectic music lover, Terry was a great fan of John Denver, the Eagles, Stan Rogers, Leonard Cohen, the Crash Test Dummies, Phil Ochs, the McGarrigle Sisters, Neil Young, Edith Piaf, Nana Mouskouri, Eric Bogle, James Keelaghan, Wyclef Jean, and many, many more artists. After the move to New Brunswick a particular favorite was "The Place That I Call Home", by Shanklin Road. He loved living in New Brunswick, loved drives along the shore with Ginger, loved eating poutine râpée, and loved desserts, especially poutine à trou and pumpkin pie with lots of real whipped cream.

When personal computers were first available Terry quickly became an avid computer user, nearly panicking whenever the Internet was down. For several years in Ontario he ran a very popular eclectic music-streaming radio station on Mercora Radio. He kept up with the news of all kinds and liked to argue politics and ethics, discuss animals and nature, and trade jokes in discussion groups--which is how he and Ginger met. He had a quick wit and a delightful sense of humour until the very end.

Terry will be sadly missed by the love of his life, his wife Ginger Hallett of Saint-Anne-de-Kent; his daughter Linda (Thumb) Smith (Neal) of Belleville, ON, granddaughters Courtney and Caitlin and great granddaughter Roya, all of Belleville, ON; his daughter Lisa Aker, grandsons Logan and Kade, all of Brighton, ON; his son Lawrence "Larry" Hallett of ON; Ginger’s son Kyle Louder of Chicago, and daughter Emily Brown (Arben) and their sons Caius and Trajan (who call him Grandpa Toad) of Gaithersburg, Maryland, and his beloved "Dogger".

The family would like to thank the Rexton Lions Nursing Home for the excellent care and attention they gave to Terry. He was happy there, loved the staff and told them so, and was much loved in return. Despite the restrictions of the pandemic, Ginger visited Terry in person as often as possible and Terry was able to see and talk to Ginger and "Dogger" via video chats that the staff facilitated frequently. The activity director, Juanita Hebert, was great about messaging Ginger photos and videos of Terry from time to time, and she created loving hands gifts for the families of the residents, describing the highlights of their loved one's life so far. We are so grateful to have the photo of Terry’s hands. Sharon MacDonald, Director of Care, arranged Ginger’s surprise visit to see Terry on May 7th, none of them knowing, or even suspecting, that it would be their last visit in person. That lovely visit is a treasured memory. Two of his favorite nurses were with him when he passed so suddenly, comforting him; this is a tremendous comfort to the family. He was so fortunate to have been truly cared for and cared about at RLNH. As he grew older Terry used to worry about ending up being 'warehoused'. He was spared that fate.

As per Terry’s wishes there will be no visitation at the funeral home or funeral service.