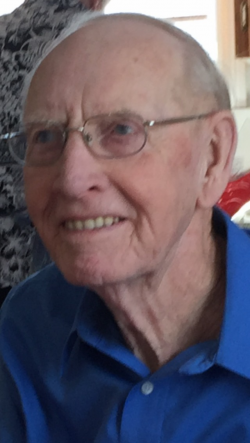 REXTON, NB – Vance Glencross 84, of Rexton, passed away at his residence on Saturday, May 7, 2022 surrounded by his loving family.  Born in Rexton, he was the son of the late Robert Glencross and late Doris (Kinread) Glencross.

Vance began work driving bus for SMT.  He and his wife Mamie were owner/operators of Mid-Way Grocery in Rexton for many years.  He drove school bus, volunteered for Saint John Ambulance and Meals on Wheels.  He was a life time elder and honorary member of St. Andrew’s United Church and caretaker.  He was also a member of the Rexton Area Health Center and past president of the Rexton Curling Club.

Vance was a large part of his community, and a staple behind the counter at his store, so many would drop by every morning to pick up their newspaper and hang around for a chat.  He would deliver food to any of the seniors in the community that could not get out.

Vance loved to curl, and spent many hours volunteering for the club.

He was a huge animal lover and any dog would greet him with a wagging tail.

He is also survived by one sister, Rhonda Foubert (Roland) of Rexton; three brothers, Barry Glencross (Muriel) of Rexton, Richard Glencross (Marilyn) of Dartmouth, NS, Claude Glencross (late Rose) of Ontario and many nieces and nephews.

The family would like to thank the Stella Maris Hospital Emergency Nursing Staff with a extra special thank you to Tiffany Little and the extra mural staff for their compassionate care of Vance.